The COB is a large orchestra, with strings, horns and rhythm section, founded in autumn 2010 by composer & conductor Hazel Leach. The members of the orchestra are not only improvising instrumentalists, but are also the composers. There is no fixed line-up: the composers can select instruments from the pool, to develop a brand-new and innovative orchestral repertoire with stylistic influences ranging from classical to jazz and from folk to free…. the music written for this band has no exclusion zones.

Since its founding in the autumn of 2010 the COB has become an established part of the Berlin jazz-scene, with regular concerts in the Kunstfabrik Schlot.

In 2014 it won international recognition with the release of two very different CDs: the audio-book “Spazieren in Berlin” (texts by Franz Hessel, music by ten COB-composers, produced by the rbb (Radio Berlin Brandenburg) and the first orchestra CD “Free Range Music” (JHM 224). 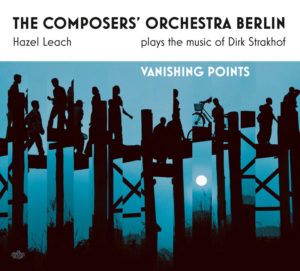 Many of our COB-composers have written too much to play regularly. In April 2020 we released the CD ‘Vanishing Points’ with music written by our bassist Dirk Strakhof (Jazzhausmusik JHM 271).